During my fourth and final week of the St. Ignatius’s Spiritual Exercises, we encounter the risen Lord. Joy is the grace we savor. Joy is a gift from God, freely given and often unexpected. I found myself reflecting on the difficulties so many had in recognizing Jesus after the resurrection (Mary Magdalene John20:15, the Emmaus story Luke24:13-16, and Thomas John 20:27 ). On Thursday, of this week, I was blessed with being able to attend the Frozen Four game between BU and North Dakota. The blessing was not the game, but the revival of a tradition my son and I have cherished since 2001. The Frozen Four was different this year. My eyes were wide open to those around me. The moment I arrived at my seat, I noticed my seat partner- a very large North Dakota fan wearing the ugly green Fighting Sioux jersey. 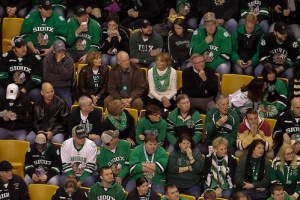 As I sat down, I gave this man a smile and asked him, ” Who are you rooting for tonight?” This was not a sarcastic question, but an ice breaker that began my silent observation of him for the next 3 periods. I was drawn to this man’s passion towards hockey and his genuine love for the North Dakota hockey team. I loved listening to his comments about the game or his very quiet “Go Sioux” cheers. I was beginning to like this guy. I was also envious of him. He had the authentic joy I so desire. He was having fun, enjoying the moment and he never lost his smile even as his beloved team lost the battle on the ice. My night only got better as my son and I tracked down my cousin. As we entered his suite, it was darker than most, but filled with 20 guys enjoying the the game and each other. The first face I saw was my sister Meredith’s old BC boyfriend, a man I have not seen since 1984. We connected instantly and the conversation had us reminiscing about the great times we shared with my sister during her time at Boston College. Moments after our conversation ended, I finally connected with my cousin Kevin. He instantly beamed when he saw Patrick and me and proceeded to share with me a story that at this point is confidential…but truly amazing. Patrick and I were meant to be in Section 111 and Suite 650 on Thursday night. God was breathing on us all as the Holy Spirit was present in the TD Garden. Faith in Jesus makes him present, even when we can’t see Him. In John 20:29, Jesus said to him, “Have you come to believe because you have seen me? Blessed are those who have not seen and have believed.” The fourth week reminds us that death, despair, violence and sadness will not have the last word: joy does. Walking with the risen Lord, we appreciate how Easter is happening all the time, with joy surprising us everywhere”. Fr. Kevin O’Brien S.J.